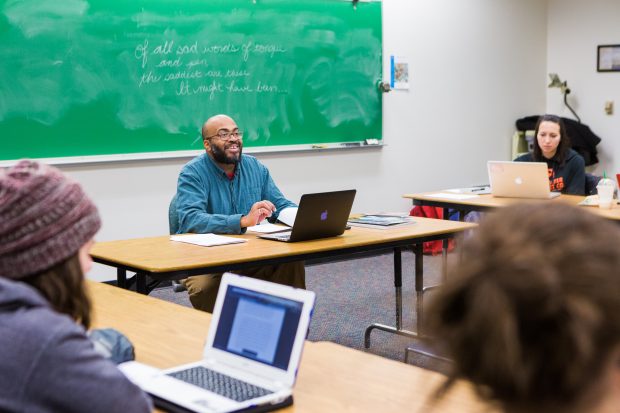 The Master of Fine Arts program is a rigorous three-year residency combining in-depth study of literature with an intensive focus on poetry, fiction, and creative nonfiction. The program is made up of a core of writers who have come to Alaska looking for a different, more attentive way of life and the support of a community of like-minded artists.

The program’s goal is to prepare students to be stronger writers, more independent thinkers, and well-rounded teachers. It offers several unique features to distinguish it as especially challenging and rewarding. Its participants may enroll in both multi-genre and genre-specific workshops as well as three genre-specific forms courses. A second-year comprehensive exam requires students to read widely and then define their own future aesthetic goals. Third-year students work closely with individual mentors as they prepare manuscripts for thesis defense and eventual publication.

The beauty and ruggedness of the Alaskan landscape offer a wide range of new experiences to the writer; students in the program receive not just an intellectual education, but an experiential one–an opportunity to live more simply and purposefully and in doing so develop new ways of seeing the world.

The UAF graduate creative writing program was established in 1965, making it one of the oldest M.F.A. programs in the nation. Four Iowa workshop graduates, known as The Flying Poets, got it started. Their name reflects the fact that they were active throughout the state, taking creative writing workshops and readings out to remote Alaskan villages by air.

In the 1970s, David Stark, a fiction writer who’d studied with E.L. Doctorow at Irvine, ran the program. He brought in the distinguished Alaskan writer John Haines to assist. I  joined the program in 1976. The following spring some of the graduate students decided to start a literary magazine. They established Permafrost, which is still active and still run by students.

In 1979, Stark and I co-founded the Midnight Sun Writers’ Conference. It met for a week in June, when indeed the sun does hang around Fairbanks until midnight. Faculty over the years included William Stafford, Maxine Kumin, Ted Hughes, Ray Carver, Tess Gallagher, Robert Stone, Hilma Wolitzer, and Phillip Lopate. The conference lasted for about a dozen years but at that point the M.F.A. faculty decided to apply the Midnight Sun funding to bringing distinguished writers in during the school year. Visitors have included Lucille Clifton, Alberto Rios, Robert Pinsky, Rita Dove, Francine Prose, and Gary Snyder.

In the early ’90s, under Peggy Schumaker’s direction, the Dead Writers Reading was established, both as a fundraiser and as outreach to the community. Presented at Halloween, this program invites anyone to come dressed as his or her favorite dead writer and read a brief selection. In spite of the somber name, it’s a high spirited occasion, held at the Blue Loon, a local restaurant/bar/theater. Numerous prizes donated by stores and businesses in the community are awarded during the evening.

Over the years, UAF graduates have published dozens of books and won widespread recognition. Their awards include NEA fellowships, the Whiting Award, a New York Times notable book of the year, and The Flannery O’Connor Award, and in addition two of our graduates have served as Alaska Writer Laureate.

Students have come to the program from England, Brazil and Japan, as well as from Canada and most of the Lower-48 states. Some live on campus but others choose a more adventurous lifestyle. In either case, they can expect spectacular auroras and chilly winter temperatures to be part of their experience. One applicant wrote, “I’ve always dreamt of living in Alaska. I know it’s my fate.”